The latest distributor to join the BFFS Booking Scheme is Third Window Films, with 30 new titles representing some of the best of contemporary Asian cinema. In this post I review two of the new films, Himizu a love story and revenge thriller set in a dystopian vision of post-tsunami Japan; and The President’s Last Bang, a lavish, satirical take on the murder of Korean President Park Chung-Hee.

Judging by this piece of work Sono’s view of Japanese society is very poor indeed. This is a Japan of gangsters, prostitutes, vagrants, failed parents and troubled kids. It is a Japan suffering the consequences of the March 2011 tsunami and accompanying nuclear disaster, and seemingly failing to address the repercussions. The film focuses on Sumida, a 14-year old who, along with his mother, runs a boat renting business on a lake on the city outskirts. Sumida’s express wish is to live an ordinary life, and to be neither happy or sad. In this he rejects his teacher’s earnest sermon that each student is an individual ‘flower’ that must rise to greatness regardless of Japan’s devastation.

Sumida shows affection and generosity towards several homeless people who lost everything in the tsunami – allowing them to build shelters on his land, and even making them a bath. He seems a quiet but gentle soul, and ironically his professed desire to live an ordinary life is exactly what sets him apart from everyone else. His rebellious ideas enamour him to class-mate Keiko, who becomes infatuated with him, and adorns the wall of her bedroom with quotations from Sumida. Her eager and desperate advances are entirely ignored by Sumida.

Sumida’s hoped for future is confounded by his family – first his father appears looking for money, and beats Sumida when he fails to provide any, and then Sumida’s mother abandons him. Later Sumida’s father returns and drunkenly professes to Sumida that he wishes he would die,  a desire echoed by Keiko’s mother towards her – in a surreal and disturbing sequence Keiko’s mother unveils a gallows she is building for Keiko.

The film is punctuated by several bizarre and uncomfortable set pieces such as Sumida’s recurring visions of committing suicide among the ruins of towns destroyed by the tsunami, scenes which Sono soundtracks with screeches, clangs and drones; or the grim and horrifying climax of a sub-plot wherein one of the homeless people who Sumida befriends turns to crime.

Much of the film is deeply allegorical or directly scathing of Japanese society. News reports play out in the background of many scenes as scientists and reporters offer comment on Japan’s short-sighted reliance on nuclear energy that is now leaving the youth to solve their parent’s generation’s problems, just as Sumida is burdened with paying off his father’s debt to a yakuza loan shark. All of the expected sources of care and guidance are absent, as mentioned the teenager’s parents have entirely rejected them, and the school doesn’t care when Sumida and Keiko stop attending. Instead the only sense of community and support comes from those who have themselves lost everything. The dispossessed who have taken up residence by the boat house are dedicated to supporting and encouraging Sumida and champion him as the only one who can shape Japan’s future. Sono is suggesting that only those who have already suffered understand the need to work together, and that the state itself is useless – though the police and ambulance services are referred to, they are never seen and seem to overlook the violence frequently witnessed in the film.

Unfortunately Sumida’s depression and stubbornness mean he mostly rejects help, both from the homeless and the devoted, diligent, Keiko. Instead Sumida decides that the only way to resolve his problems, and the problems of his society, is to kill those who degrade and disturb the lives of ordinary citizens. Sumida begins to prowl the city streets at night looking for trouble while Keiko attempts to convince him to return to a decent, moral life. 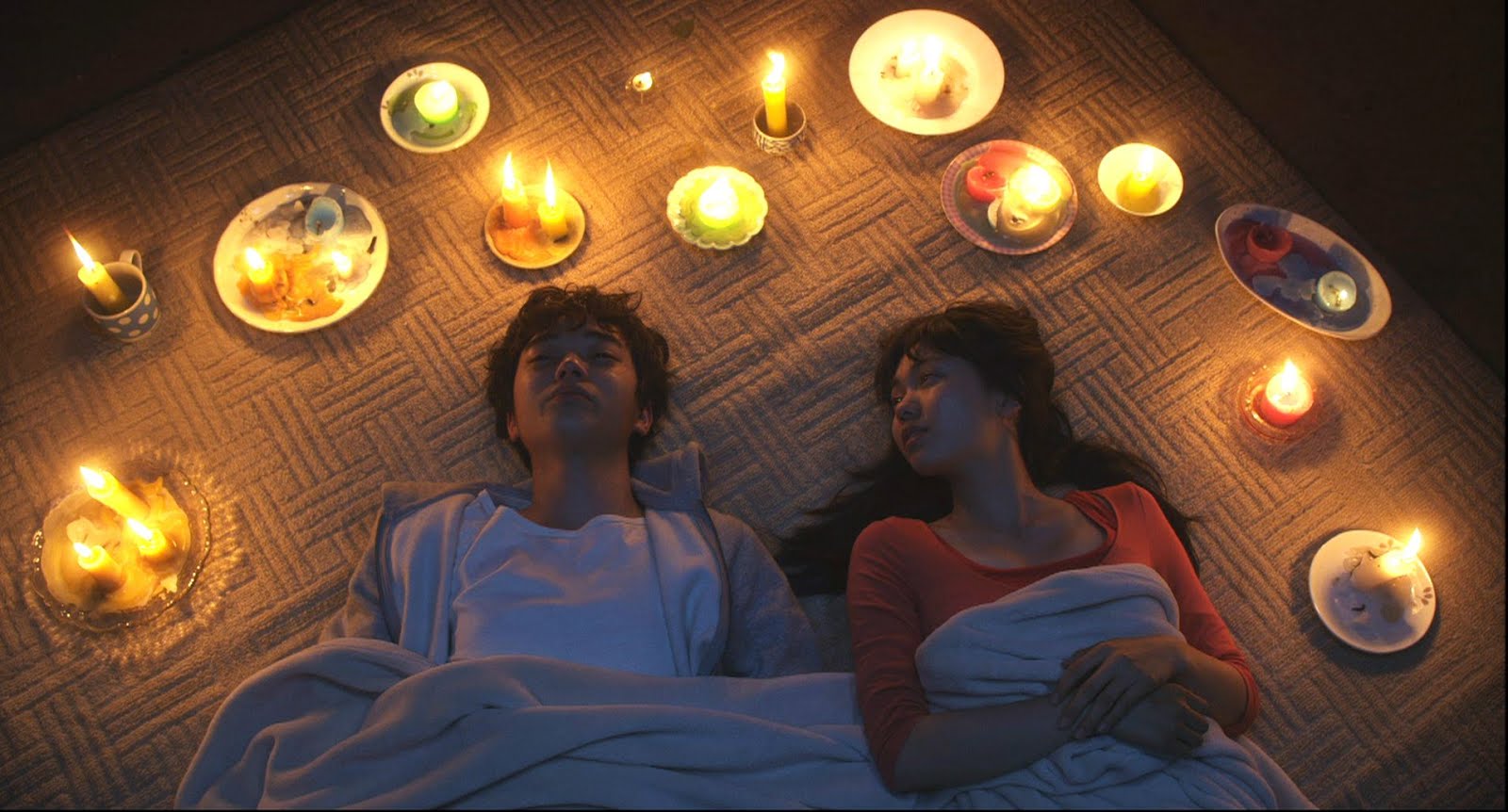 The relationship between Sumida and Keiko is the backbone of the film and their interactions play out as a mixture of teenage angst/uncertainty, and as a means by which they can express their private frustrations and misery. It is remarkable that the young leads are able to convincingly portray their complex and challenging roles so convincingly. The demands of the narrative are great and the film’s tonal shifts are broad, though for the most part handled well. Though the film occasionally dips into melodrama it successfully melds romance, horror, action and drama into a haphazard but deeply rewarding whole. At times the film is exceptional and Sono is clearly a richly talented filmmaker. Though there are occasional inconsistencies and missteps this is not so much a failing but a consequence of the sheer scope of the piece. Himizu is a bold, visionary and incendiary film.

In 1961 General Chung-Hee Park installed himself as President of South Korea through a military coup. He held power until his assassination in 1979, a period of rule in which he modernised Korea, but did so via a repressive and brutal dictatorship. This controversial film concentrates on the night of his assassination, and its satirical and defamatory portrayal of President Park triggered huge debate within Korea, culminating in three minutes of archive footage was censored from the film.

The archive footage, which remains in the international cut, and has since been restored in Korea, was cut, so it goes, to ensure that audiences did not confuse the film for fact. I find it hard to imagine anyone making that mistake but the footage is crucial to the film. It both underlines the negative aspects of Park’s rule, showing large-scale anti-government protests, and also the adoration with which many in Korea viewed Park – the film ends with footage of citizens weeping at his funeral. Park was a divisive figure in Korean history, both admired and derided, and one commentator likened the film’s significance in Korea to somebody making a film about George Bush in which he is shown snorting cocaine and sleeping with under-age women. In fact the portrayal of President Park goes further than that – as well as enjoying partying and debauchery he is shown to be a coward, and to speak in Japanese and prefer Japanese culture (the significance of this can easily be missed by audiences unfamiliar with Korea’s history of colonial rule under Japan).

The film comes across most obviously as a savage attack on Park’s character and certainly the first half of the film focuses on his behaviour, his weaknesses and ultimately his assassination. Im makes something of a joke out of this as well – the historical fact is that Park was assassinated by Chief of Intelligence Jae-Kyu Kim but in the film his motivations for the act are absurd. Though he gives a speech about the value of democracy, it doesn’t appear that his heart is in it at all, and in fact the film suggests his real motive is anger at his intestinal problems and boredom derived from endlessly following Park’s orders.

The first half of the film then is a parody of President Park, a blackly comic take-down of a dictator. But the film then moves on to the consequences of the murder and the resulting confusion and panic as ministers and officials attempt to deal with Park’s death. Here the film presents a wider argument about the impotence of individuals attempting to change the status quo. While Kim gets away with the murder laughably easily he is unable to control the aftermath of the coup and events spiral out of his control. A knowledge of Korean history serves to emphasise this argument: the dictatorship continues under another guise for many years afterwards, while Park’s own daughter was elected President last year.

Fortunately while The President’s Last Bang is appreciable as a political statement and critique it is also a great film in and of itself. Humorous, slick and engaging Sang-Soo Im has made a political film that manages to be both entertaining and insightful. The performances are all excellent, though Yoon-Shik Baek as Kim deserves special mention, and the direction is tight and assured, with a set-piece long take shot of the aftermath of the assassination being truly jaw-dropping.

Though the film works well without knowledge of the historical context (as I lacked upon my first viewing), when screening this film programme notes or an introduction would be useful in conveying to the audience just how provocative this film is.

The full list of Third Window titles is available to view here.