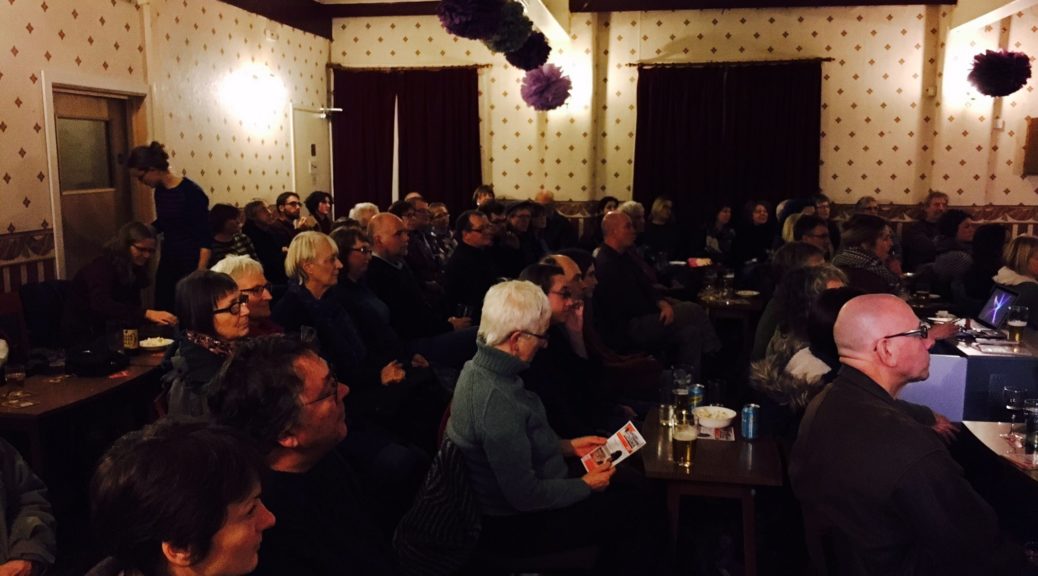 Electric Theatre Cinema, Dolly Shot Pop Up Picture House and The Red and Green Club combined forces to screen I Daniel Blake and raised over £1000 for Huddersfield’s Welcome Centre this January. The three local community cinemas screened Ken Loach’s BAFTA nominated film the weekend starting the 6th January for three consecutive nights, offering pay what you can afford tickets and collecting money at the same time.

“We got the idea at this year’s Cinema For All Conference”, explains Zana Wood Co director at the Electric Theatre Cinema. “There was a lot of talk about championing each other as small independent film societies and I, Daniel Blake seemed the obvious choice of film for a collaborative project. We were thrilled when Dolly Shot Pop Up Picture House and The Red and Green Club agreed to join us. Caroline from Dolly Shot, a pop up cinema, had the great idea of screening on the Friday night in Huddersfield Methodist Mission and to raise funds and awareness for the Welcome Centre. We are thrilled that all three of us could contribute to such a great cause.”

Caroline from Dolly Shot and Suzi Tibbetts from Electric Theatre took the money to the Welcome Centre who were astounded and grateful for such a huge and unexpected donation. Emma Greenough, the marketing and publicity worker from the Welcome Centre thanked all three cinemas for hosting the events and also for their wonderful donations and support.

“But that is not all,” continued Zana, “Due to the success of the film and having to turn people away we have decided to screen it again in Marsden on the 4th February at the Bandrooms. The film starts at 7.30, and as before tickets are pay what you can afford, so there is still an opportunity for people to see this great film and for us to raise even more money for the Welcome Centre.

Zana added “It is a great credit to film societies and community cinemas around the country, with the valued support of Cinema for All, that allows us to champion each other in this way to bring independent cinema to the nation and we look forward to more collaborations in the future.”