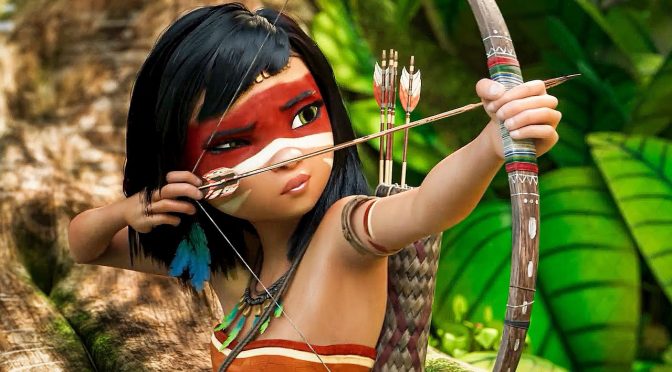 Want to keep families busy over the summer holidays? Our Arts Emergency intern Magda has put together this handy programming guide made up of  just a handful of family friendly titles from our Booking Scheme. All available for just £90!

Based of the beloved Terry Deary book series of the same name and starring an all star cast, this big screen adaptation tells the story of Roman teenager, Atti , who is forced to join the Roman army and is sent to “miserable, cold, wet Britain” where “the natives are revolting – quite literally”. Things go from bad to worse when Atti is captured by Orla, a feisty teenage Celt desperate to prove herself as a warrior. Book now.

Ainbo: Spirit of the Amazon

This beautifully animated Peruvian, American and Dutch co-production, tells the story of a young girl who was born and grew up in the deepest jungle of the Amazon. One day she discovers that her homeland is being threatened and so embarks on a journey to seek help from the most powerful Mother Spirit of the rainforest. As she fights to save her home, she struggles to reverse the destruction. Guided by her mother’s spirit, Ainbo is determined to save her land and her people before it’s too late. Book now.

A Birder’s Guide to Everything

This charming charming coming of age tale, starring Oscar nominees Ben Kingsley and Kodi Smit-McPhee, follows 15-year-old birding fanatic, David Portnoy, who thinks he’s made the discovery of a lifetime. So, on the eve of his father’s remarriage, he escapes on an epic road trip with his best friends to solidify their place in birding history.  Book now.

Buster Keaton followed up The General with this hilarious  higher education comedy. Keaton is bookworm Ronald, whose high school girl Mary ditches him for someone with the athletic prowess that Ronald lacks. Determined to win her back, Ronald enters college with an eye on sports, but two left feet. Book now.