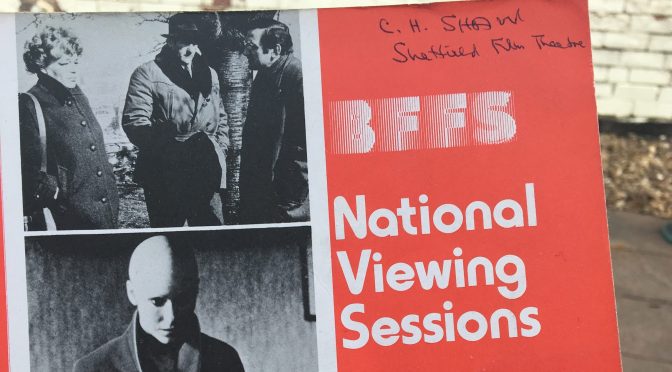 In memory of Dr. Clifford Shaw

Cinema For All has been very fortunate to have been remembered in the Will of Sheffield cinema lover, and ex-Sheffield Film Society Chair, Dr. Clifford Shaw. In this piece, Cinema For All Operations and Development Manager Jaq Chell speaks about her memories of Dr. Shaw, who was a familiar face to all Sheffield cinema-goers.

Dr. Shaw loved going to the cinema. He saw everything that was released, and went to every cinema in the city – from indie gems at the Showroom, to documentary marathons at the Odeon, to blockbusters at the out-of-town mega-plexes Vue and Cineworld. Though not necessarily a film buff, Dr. Shaw instead loved the experience of going to the cinema, and was dedicated to the cause of celebrating cinematic environments.

I first met him when I was an usher at the Showroom in 2005. I saw him weekly, when he would buy a ticket to several films in one day, and munch on a packet of custard creams in between screening times. There was a hushed reverence surrounding him, but he was never a demanding customer. He just quietly enjoyed what films we had on offer, then caught the bus home.

After some time, I chanced upon a copy of the Sheffield Cinema Society newsletter that he regularly dropped off at the Box Office for the cinema directors to read. It was a pure gem – hand typed and photocopied with care. Rather than a run-down of upcoming films, or a series of reviews, the newsletter spoke with love and appreciation of the cinema experience – reviews of newly installed seats at the Vue in Meadowhall, comments on any changes in planning permissions that would enable more cinemas to open, and memories of long-gone Sheffield picturehouses.

It goes without saying that I paid my £8 and joined the society immediately. Perhaps excited that a younger person was interested in his group, Dr. Shaw very kindly gifted me with pages and pages of back issues, and I struggled to carry them to my car after a late shift.

A few years down the line I started work at the British Federation of Film Societies (now Cinema For All) and I began to learn more about Dr. Shaw’s place in cinematic Sheffield.  Having been a key organiser of the Sheffield Film Society, Dr. Shaw was often the first person I’d call upon to answer any questions about the history of the organisation (via letter, of course). A rummage in our archives often revealed old copies of Film (the magazine BFFS produced from the 1950s to the early 2000s), or old Viewing Session programmes that had CLIFFORD SHAW written on the front in bold pen.

As the years went by, I saw less of Dr. Shaw and eventually the Cinema Society newsletters stopped coming. I last saw him, predictably, at the Showroom Cinema. I don’t remember what film he went to see, but I know that it probably didn’t matter to him. Going to the cinema was his life.

Since Dr. Shaw passed away I’ve seen many dedications to him (including in Sight & Sound), heard from many people who cared about him, and dug out those old copies of Film to find his handwritten notes. Though a quiet man who rarely chatted idly with those who would see him so often, he managed to touch us all. His presence in Sheffield meant so much to so many people. His legacy is an unerring love of the act of going to the cinema – of sharing film and of cinema for all.

Dr. Shaw’s generous support will help ensure that Cinema For All can continue to support new film societies, community cinemas and clubs, both through our core work, and through our outreach projects. Thank you Dr. Shaw.

To find out more about leaving a legacy to Cinema For All, go to: http://cinemaforall.org.uk/about-cinema-for-all/support-us-2/sponsorship-and-legacies/legacies/