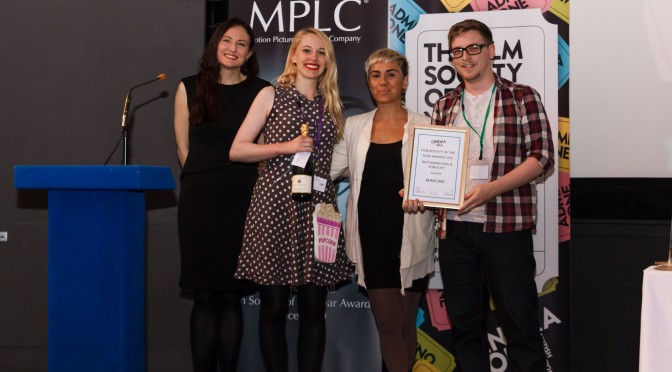 Minicine’s organisers Michael Wood and Abi Standish said, ‘To win the Film Society of the Year award has been the most wonderful surprise, one that is still sinking in. We would like to thank everyone who has supported us and most importantly to the individuals that come to our screenings and events that make up such a special community that is such a joy to be a part of. We’d also like to express our gratitude to all the other volunteer film exhibitors out there, who inspire us and continue to make the community cinema sector the friendliest place in film. When a community cinema is winning, we’re all winning.’

Those who attended the awards were treated to an annual address from Cinema For All president and Huffington Post film critic Derek Malcolm as well as an inspirational speech from co-host, Mania Akbari, the Iranian artist, filmmaker and actor. For his dedication to the film society movement, the Roebuck Cup was awarded to Richard Clesham. Cinema For All is proud to be able to pay tribute to such a fantastic former staff member, whose support has made a huge difference to so many groups.

In recognition of the work volunteers do in their communities, non-theatrical distributors Filmbankmedia again presented one lucky winner with £1000 towards developing their future activities. Majella Griffin, Filmbankmedia General Manager, presented this year’s winner Fleet Film Society with the prize.

The awards also saw the launch of the delicious Cinema Beer – a collaboration between Marble Brewery in Manchester, Prohibition in Northern Ireland and Cinema For All. The beer will be available across the country, and will help audiences find their nearest community cinema. Head brewer Matt Howgate said, ‘When approached to support the Cinema For All awards this year we were more than happy to help – Marble gets to make a different style beer that has a worthwhile concept behind it… we just hope we have enough to go around!’

View images from this year’s ceremony (please credit images to: Jules Lister/ Cinema For All)