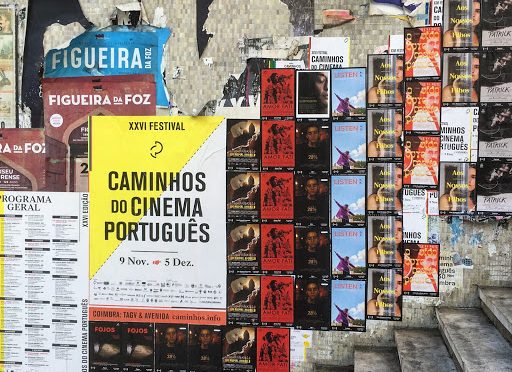 Julia from No Planet B tells us all about their exciting in-person experience on the IFFS Jury for Caminhos do Cinema Português which took place in Coimbra, Portugal from 9 November – 5 December 2020.

While film festivals around the world were forced to cancel, postpone or move their entire programme online, the Caminhos do Cinema Português in Coimbra, Portugal defied expectations by delivering an in-person event in 2020. Caminhos is unique in that it focuses on Portuguese-language films, celebrating home-grown independent cinema that isn’t often exhibited internationally outside of the film festival circuit.

Through Cinema for All and the International Federation of Film Societies, I was selected to attend Caminhos as a member of their FICC/IFFS Jury. Two other jurors and I, from Portugal, Catalonia, and the UK respectively, were tasked with watching the 45 shorts, mid-length films and features (spanning documentary, fiction and animation) in the Seleção Caminhos, with the goal of awarding one film the Don Quijote prize. The other two jurors were unfortunately unable to attend the festival in person, so they watched the eligible films on FilmFreeway and we kept in touch via Whatsapp and email throughout the festival to share our highlights and insights from the programme.

I travelled to Coimbra, a city in central Portugal that is home to one of the country’s oldest universities as well as the Caminhos festival, via Porto. It was strange to travel from London, in the midst of a second national lockdown, to Portugal where all the shops, cafes and restaurants appeared to be open, albeit with strict rules on the use of masks and hand sanitiser. That being said, a state of emergency was in place while I was there, which meant that during the first weekend I was under curfew and had to stay in my hotel from 1pm until the following morning. Fortunately, I had lots of festival films to watch on FilmFreeway to keep me busy! The weather was certainly an improvement on November in London. 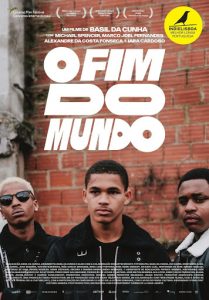 There was considerable buzz around Listen, a Portugal-UK co-production rumoured to be Portugal’s submission to the Academy Awards. Set in the London suburbs, the social realist drama was directed by former actress Ana Rocha and stars Lúcia Moniz, who may be familiar to UK audiences as Colin Firth’s romantic interest in Love, Actually. The film follows a Portuguese immigrant family who battle with social services over the care of their children, and features an excellent performance from young Deaf actress, Maisie Sly.

One of my favourite films was Cláudia Varejão’s docu-fiction Amor Fati, a tapestry of love in its different forms: between couples, family and between humans and their pets. I discovered after viewing that the filmmaker had cast real partners and families in the film, thus making their affection for each other feel authentic and beautiful.

Numerous films in the programme addressed Portugal’s history of colonialism. This was especially interesting to me, since we in the UK are increasingly attempting to reckon with our own colonial past. Um Animal Amarelo (A Yellow Animal) followed a journey between former Portuguese colonies Brazil and Mozambique. I was impressed by José Barahona’s participatory documentary Nheengatu, which focuses on the hybrid language spoken by many indigenous communities in the Amazon. The director gives smartphones to his participants to allow them to film aspects of their everyday life, and includes their critical or curious comments about his presence in the final edit. 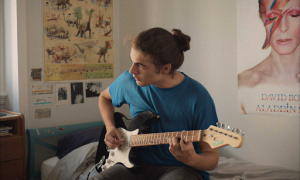 There were many outstanding short and mid-length films in the Seleção Caminhos, although it was sometimes challenging to compare them to the longer features when considering the award. Catavento (Wind Vane) was the last instalment in a trilogy by João Rosas, following a young man growing up in Lisbon. I enjoyed Mesa (Table), a witty animation about a dinner party, which won the prize for best poster and best original soundtrack. My favourite short, which ended up winning the prize for its section, was Bustarenga, directed by Ana Maria Gomes. It’s a documentary about Ana’s trip to a small village to see family; she asks them about the existence of Prince Charming and seeks their advice on how to find a boyfriend, with hilarious results.

After we had all watched the eligible films, we conducted our jury deliberations over Zoom. Following a short discussion, we unanimously decided to give an honourable mention to the mid-length film Catavento, directed by João Rosas. We recognised the warmth and affection Rosas felt for his characters in the final part of this coming-of-age trilogy. The Don Quijote prize was awarded to Basil da Cunha’s O Fim do Mundo. We were impressed by the director’s sensitive work with non-professional actors and his familiarity with and compassion for the community of Reboleira, gained by living and working there for a decade. Being the only FICC juror present at the festival meant I had to present our jury’s prize onstage at the Caminhos award ceremony, which was somewhat intimidating! I delivered our jury statement in English, while the host kindly translated it into Portuguese. 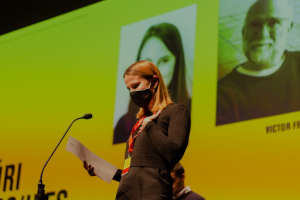 Overall, it was an interesting new experience and an in-depth introduction to contemporary Portuguese-language film! I live in the Portuguese neighbourhood in London, so it made me think about bringing new, independent Portuguese cinema to Portuguese speakers here, since many of these films won’t get distribution in the UK.

Words: Julia, No Planet B