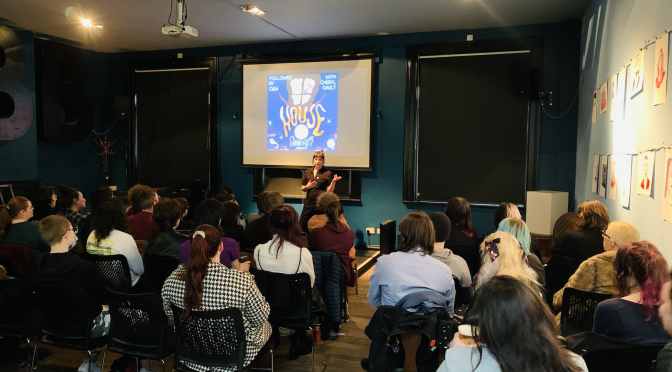 Ghouls on Film is a monthly feminist horror film club, showing films that challenge the representations of women within the genre. Expect cult classics, independent releases and rare lesser-known films that explore how women can find agency in the world of horror.

I’ve always been interested in horror, but as a woman I found that so many of the spaces that showed horror films were male dominated. I began meeting and talking to other women, non-binary and LGBTQ+ people who felt the same way – they loved horror but didn’t feel like there was a space for us to see these films. So I decided to put on some films that explored women’s agency in a genre that classically sees us as a victim, and our community started to build. I’ve received incredible support through the Sustain Develop programme by Cinema For All, which gave me one-on-one training working towards an Outdoor Screening. Through this programme, I received a workshop in fundraising which has helped our community cinema build drastically, reaching new ways to raise money to keep our screenings going. The tailored sessions in which we discussed the long term aims of our cinema have helped the most, as Abi and Ellie were able to connect my work with other case studies from their work in the past.

Our programme is a combination of films I have seen and always wanted to watch on the big screen, as well as suggestions from our community. The aim of our club is to showcase women and non-binary people in horror, both on screen and behind the camera, so these stories are the ones we show at screenings. We put together a varied programme, that combines documentary, heritage cinema and cult classics, in order to encourage a wider audience to come to our events.

The main, and most unexpected, way the screenings have affected our community has been by bringing local creatives together, and providing a space where women and non-binary people can share ideas and work on projects. We have hosted a live score screening, which allowed a local musician, Aoife Wolf, to create new collaborative work and perform infront of an audience of 70 people. We have also hosted a Q&A session with local scriptwriter Cheryl Gault in which she shared her experiences as a woman and a mother in the film sector. Finally, we put together a publication, The Ghouls On Film Zine, which has shined a spotlight on local writers in the horror community, and connected with our readers.

Our most memorable screening would have been our final season event last month, our Carrie Prom Party. We hosted an immersive screening involving local photographer, Billy Woods, taking classic prom portraits of our audience members, as well as DJ Claire Miskimmins playing tunes and lighting up the dance floor after the screening. At the end of the event, we crowned the Ghouls On Film Prom Queen (no blood was involved, fortunately). This event was also the launch party of our new zine, and we decorated the entire venue in classic prom décor; balloons, gold tassels, disco ball, the whole nine yards. We got fantastic feedback from our audience members, especially from another local film society, and a local book club who read Carrie as part of their involvement with the screening.

My main advice to someone starting a community cinema, would be to stop doubting that you can’t do it, and just say yes. Look for support from local venues, film festivals, your local council, and organisations like Cinema For All. Send emails to everyone, even if you are just in the early stages; you never know who might connect and want to support your idea. People always want to help if you look in the right places. Having a space where people can come together, even if it’s just in a dark room for 2 hours a month, creates a shared experience and a feeling of connection that just can’t be beat. I think film reaches us all in a very personal way, and being able to talk about those feelings and share them with our community is a kind of healing, especially after the isolation we have all felt over the last 2 years.

This case study was written by Isabella Koban from Ghouls on Film.

What to hear more about the amazing work community cinemas are doing around the UK? Find more Case Studies here.