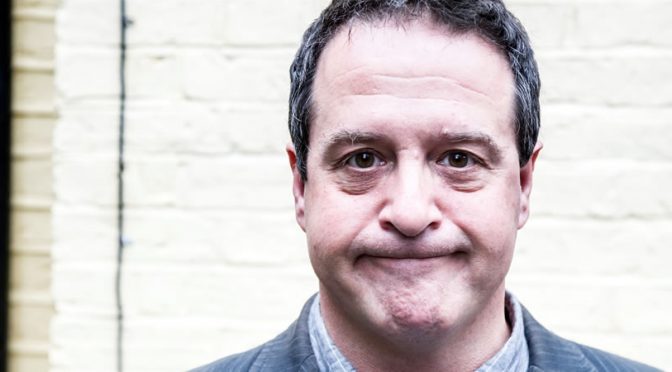 Be part of a national tour! Exclusive community cinema opportunity!

Inspirational comedian and activist Mark Thomas is planning a fabulous new Feb / March 2022 tour: Product (showing iconic clips from the 90s Channel 4 Comedy Product TV show on the big screen with in person commentary from Mark and special guests) and wants community cinemas to get involved!

“Most performers tend to think about the next gig and I have not given much thought about the Product for 25 years. I started going through the episodes, with my old producer Geoff Atkinson, and realised I had forgotten how much fun the Product was, how daring we were, how much we got away with and how we did it by the skin of our teeth. I had forgotten our defeats and our victories, the laws we changed, the companies we spiked, the MP’s we caught. Looking at it again I realised this is the story of how a group of people began to learn how powerful TV could be as a medium for change, how real our enemies would be and how we got out before we joined their mediocrity.  Was it worth the emotional damage, the panics and turbulence of that work schedule that relied so heavily on improvisation and chance? Was it worth burning so many bridges to make the show? Was it worth burning them to walk away? F***yeah!”

Challenging corporations, upending politicians and their failures. The show quite literally exposed corruption and stopped arms deals, changed the law on tax relief and inherited wealth, revealed British Nuclear Fuel radioactive pigeons forcing them to spend £1m in clean-up! And caught the Home Secretary hiding behind the war on drugs.

Before The Revolution Will be Televised, Joe Lycett, Lee Nelson, Dom Joly and Balls of Steel, this was the show that set the agenda. And now in time honoured TV tradition, it is finally being repeated and you can get involved!

We’re looking for around 10-15 community cinemas across the country who would be interested in welcoming Mark to tell the story of the series, with clips and commentary on the show that didn’t pull its punches.

Mark look backs and tells the story, from knob gags to arms deals. From risque to risky: the show that stopped MP’s careers and became too hot for Channel 4.

With favourite clips, stories, facts, updates and behind the scenes gossip from the ground-breaking Mark Thomas Comedy Product, what went right and what went wrong.

Mark will be live with guests (including the series producer Geoff Atkinson) to discuss the adventure that was bound to cancel itself before the channel got round to it.

To express your interest in hosting an evening with Mark Thomas’ Product please email tine@tincatentertainment.co.uk with your location and venue size by Monday 22nd November 2021. Groups will need to be able to host an event between the end of January and early March 2022 and provide the following tech: to be able to screen from MacBook Pro laptop using QLab software (supplied) for video and audio, 2 microphones onstage, plus at least one roving audience mic (if needed), and technical assistance for get in and set up. Two chairs will be required on stage. Please note – the show tours with laptop and operator!