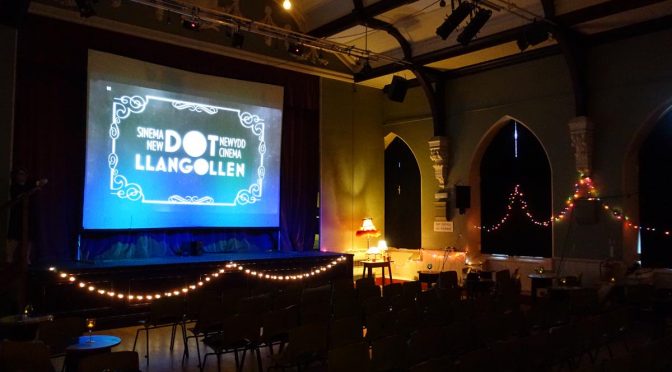 The BFI Neighbourhood Cinema Equipment Fund is open for applications till 26 September 2016. To explore the reasons why the fund is such a great opportunity we asked some previous successful applicants about the fund and the major benefits that the equipment has brought them.

The fund exists to help established community cinemas replace old equipment but also to secure the future sustainability of community cinema screenings by granting full sets of projection equipment to groups that have been running for 6 months or more.

With an NEC projector of optimum brightness and an efficient fold away screen, a huge benefit of the fund is the quality of the equipment:

“Overall, the benefit has been to make our screenings technically on a par with any local cinema (and better than some)”
Charlie Pugh, The Tolmen Centre

“the equipment meant that the sound problems we had with our old kit after moving to a new venue were resolved.  The problems were starting to cause an issue with some of our long standing members and we were at risk of losing them. However the improved sound quality has meant that membership has been retained.”

Charlie Pugh from The Tolmen Centre also says that:

“a secondary benefit is that our team of volunteers retained and indeed expanded their enthusiasm for, and commitment to, the screening of films in our small, remote village. Providing such a dedicated team with really good equipment provides a sense of satisfaction in their work which is important in sustaining an all-volunteer organisation which totally depends on their time so freely given.”

“It is helping to make it easier for the volunteers that set up and deliver the screening.” Jenny Foster, Liskerrett Community Cinema

The fund has ensured that groups across the UK have been able to host all kinds of film events for their community:

“We have introduced a second screening, on the first Friday of each month, specifically aimed at people with hearing issues. So each afternoon screening has full sub-titles. Our space is already accessible with a hearing loop system and disabled toilet facilities, and we offer free entry for carers at screenings.”
Jenny Foster, Liskerrett Community Cinema

“Thanks to the BFI equipment fund, we were able to put on screenings in both our large and small hall, from recent films such as The Lobster to old classics such as Cabaret. We have shown world cinema like Tulpan and Closely Observed Trains and English language indie hit, Dear White People, both as modest simple affairs and all-out gala spectaculars. Without the BFI Neighbourhood Cinema Equipment Fund we actually would have ceased operating.”
Jen Sandford, New Dot Cinema, Llangollen

If you’d like to apply to the fund but you’re not sure where to start, or are having difficulties with your application please contact Holly, our Technical Advice and Equipment Coordinator holly@cinemaforall.org.uk, 01142 210314.

Apply for the fund here.