Union Films, the Student Cinema at the University of Southampton, is a volunteer-run cinema that caters to everyone from your classic 18 year old Fresher to international PhD students to student parents who want something to do with their kids on a Sunday afternoon. 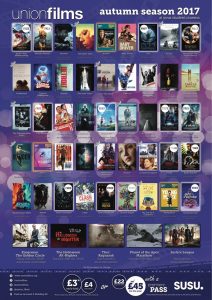 A 15 member strong committee puts on a minimum of 4 films a week, managing refreshments, volunteers, projection and everything in between. Their cinema boasts top range equipment with a Barco digital cinema projector, capable of projecting films at a resolution of 2K (2048×1080), which enables them to show 2D and 3D films. They also have a Cinemeccanica Victoria 8 projector (which used to be in the Millennium Dome!) to keep alive the art of 35mm projection. Current Head Projectionist, former Cinema Manager, Max Hayman, initially got involved due to an interest in projection and admits that’s what draws in most of their volunteers (and seeing films for free of course!).

They try and show a wide range of films, from them latest blockbuster movies which are guaranteed sell outs, to cult classics and more obscure films, with at least one arthouse/foreign film a week through their partnership with the Phoenix Film society. They’ve had considerable success when they’ve shown first run or third week of release for films such as Deadpool 2 or Black Panther, but  these are difficult to organise, both with the studios and with the Union. They’ve also been able get out of their cinema, holding 3 outdoor screenings at Halls during Freshers’ Week, which was definitely challenging but rewarding too. Their most ambitious Freshers’ yet was a great chance to get new students interested and this year they’re hoping to put on an outdoor screening at our university’s Winchester campus as well! 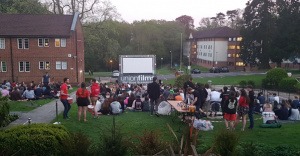 Unfortunately, unlike most other Student Cinemas, Union Films are expected to make a set profit for their Students Union each year, which means they can’t always be quite as experimental as they would like! To Max, this is the biggest challenge they face as a group. As much as they appreciate the investment the Union put into the space and projector, it’s a huge pressure to put onto student volunteers. It’s frustrating to make money and to not be able to use any of directly on their group. Ultimately, they do it because they love film and the cinema experience and are determined to make this as accessible as possible for students.

To ensure they fill their 225-seat venue, their programming and marketing strategies have to be pretty varied. Simple things such as audience choice for films can get people involved, but there’s also a lot of door knocking in halls, running around campus dressed as Deadpool or Buzz Lightyear, and naturally, competitions for freebies always work. The biggest thing is getting their name out there. At the end of the day, £3 a ticket is a pretty good draw as long as people know about them. 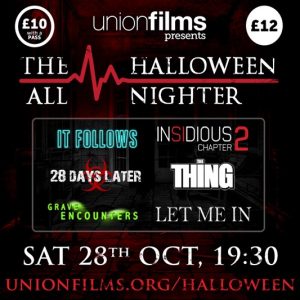 Union Films has formed some great partnerships, working with the Phoenix film society and previously with Amazon, as well as Southampton student groups such Wessex Films, The Edge entertainment magazine and currently working on the University of Southampton Student Film Festival. This past year they’ve done a lot of work with the Union’s student fundraising society RAG, putting on charity screenings as part of their ‘Big Give’ week, which were a lot of fun and got great turnout.

After 5 years at Union Films, Max most fondly remembers a Lord of the Rings/The Hobbit marathon across a weekend a few years ago. The theming was amazing, with three souvenir t-shirts designed and one of their former cinema managers made a life sized hobbit door covering the entrance to the cinema; ‘It was a hardcore watch but so much fun.’ His Parting words: ‘If you like film at all, I’d say that community/student cinema is for you. You can get involved as much or as little as you’d like, and you can really specialise at what you’re interested in, whether that’s putting on events, projecting, or just sharing films that you love with other people. You really get to see your ideas become reality, and it’s a great way to meet people both in the industry and in general.’ So why not get involved?

If you want to hear more from Union Films, follow them on social media: