‘We’re a friendly, accessible and fun film club that offers something a bit different to the usual cinema experience!’ – Imogen Weatherly

My name is Imogen Weatherly and together with my partner-in-crime, Dan Turner, I run Three Rivers Film Club in Truro, Cornwall. In March 2019, we started monthly film screenings at Old Bakery Studios, a vibrant independent venue which is home to a diverse programme of live events. When they asked if we were interested in screening films there we jumped at the chance and Three Rivers was born! At the moment we are a small committee of two, though we are thinking about recruiting new volunteers as the club starts to grow. I look after the film licences and marketing, and Dan looks after the finances and the technical bits. We share programming duties and enjoy our ‘programming meetings’ which often involve a glass of wine and lots of film trailers! We try to show great independent, British and foreign language films that might not have had a huge cinema release down here in Cornwall.

How did you get involved with community cinema?

I got involved through my day job running C Fylm, Cornwall’s network of community film clubs. We help volunteers across the duchy to set up clubs for their community, supporting them with film licences, administration, equipment, marketing and programming. I was contacted by the team at the Old Bakery who were looking to start offering film events as part of their programme, and I thought ‘this is the perfect opportunity to start my own club!’ The team at the Old Bakery have been really generous giving us autonomy over our events, so we manage all the planning, programming and event delivery. Also on the team is Marion from the Old Bakery who looks after the bar and the venue whilst we’re running the film – she’s a star!

With C Fylm we help connect communities with 32 regular film clubs popping up in villages halls and community spaces all over Cornwall. I’ve honed the skill of packing a whole cinema in my very tiny car and taking it down wiggly country lanes to a warm and welcoming village hall! Creating a cinema on people’s doorstep has a big impact for communities especially where public transport is limited, and post offices and pubs are closing all over the place. It’s a very rewarding job. 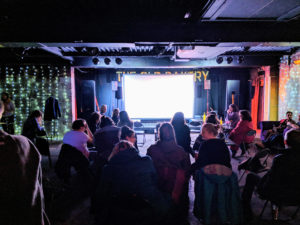 It’s been really great fun getting to know our audience and getting a bit more involved in our local community. Dan and I both moved to Truro a year ago, and we’ve fallen in love with ‘Our Great Little City’. In our audience, we have students and young adults right through to older members of the community, and we’ve had people come from all over Cornwall, which has been a real pleasure! I hope we draw them in by being friendly, welcoming and always up for a chat and a drink before and after the film, and by offering a different sort of cinema experience than they might be used to. The Old  Bakery has a real following already so this has been great to tap into, and having the bar open is a huge asset. Food and drink always helps get people through the doors!

Outside of film club, we’re both starting to find our feet in the Truro community. We regularly visit the Plaza Cinema and there’s a great scheme called Super Saver Mondays where they offer £5 tickets to all films. There are loads of fantastic small business owners who are working hard to make Truro an interesting and more connected place to be. We love them all but a few favourites are Prime hair salon, who also have a lush coffee shop and retro gaming, Mr Wolf’s Joint bar where we can always count on a friendly face and a chat, and Bazbo Comics who keep Dan up to date with his comic fix! They are always happy to put a poster up for our film clubs which we really appreciate. We’re now looking to start making stronger connections with the film club, which might look like prize draws and promotions or maybe smaller pop-up cinema events in different venues… watch this space!

This month we’re screening Lee Chang-dong’s Burning, which I’m really excited about. It was supported by BFI FAN New Releases and had such a great response that I’ve wanted to screen it for ages. In September, we’re screening Evelyn, a documentary by Orlando von Einsiedel about his own family and how they deal with the death by suicide of his brother, Evelyn. We’re screening it just before World Suicide Prevention Day and are hoping to be joined by local mental health support groups.

We select films that we want to share with friends, old and new. So far we’ve been screening fairly new releases that haven’t had a lot screenings down here in Cornwall (though we are lucky to have some fantastic independent cinemas like Newlyn Film House, The Poly, WTW and Merlin who have great programmes and facilities). We’re trying something a bit different in July where we’re showing one of our favourite films, Amelie, and we’ll have some French themed snacks to nibble on during the film. We’re always open to suggestions and recommendations from our audience, too! 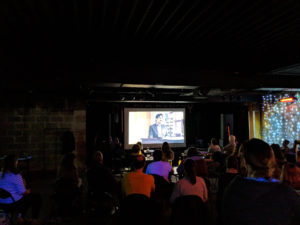 I didn’t really realise I was a ‘young programmer’ for a while… and especially at the beginning of my community cinema journey, I felt a lack of confidence as it seemed like everyone was older and way more experienced than me. Getting support and tapping into activity from organisations like BFI FAN, Film Hub South West and Cinema for All was a huge boost and continues to give me really useful skills, knowledge and connections with other young programmers. One of the benefits of being a young programmer is the opportunities that are available – discounted tickets for ICO Screening Days, and specialised support and training for young audiences through Film Hub South West and Cinema for All have been fantastic!

As an organisation, we’re still getting a feel for which films work and which don’t… as we’re still quite young we’re definitely getting to know our audience and figure out what the people of Truro want to see. Setting up a film club can also be quite expensive! We’re lucky to have a really supportive venue, as well as help with licences and kit from C Fylm, which is a huge help.

It’s impossible to choose just one… the C Fylm network of volunteer promoters are amazing and put on so many fantastic events for their communities. We’ve had film and curry nights, themed buffets with foreign language films, sing-along musicals, outdoor screenings, dress-up Rocky Horror Picture Show, film maker Q&A’s and even a film and fashion runway with local designers showcasing their work! 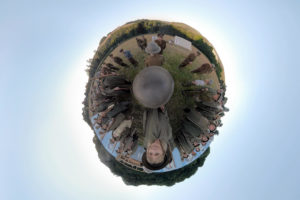 Definitely do it! I’ve completely fallen in love with community cinema, and the many forms it comes in. I feel the future of cinema is in community cinema – it brings people together, perhaps for a love of film, but definitely with a feeling of being part of something. Anyone, anywhere can host or be a part of a community cinema screening, and I think that’s so exciting. There are so many possibilities.

If you’re interested in getting involved in community cinema, just take the leap! There’s a lot of support out there from organisations to help you start a film club, from local groups like C Fylm in Cornwall to national organisations like Cinema for All. There are so many people who are able to help – use their support and guidance and go for it!

If you want to hear more from Three Rivers Film Club or C Fylm, follow them on social media: