We are The Movie Mavericks, a youthful informal collective of creatives  bringing curated short films and creative film events which are affordable and accessible to our city of Stoke-On-Trent. – Chloe Rickett, Volunteer 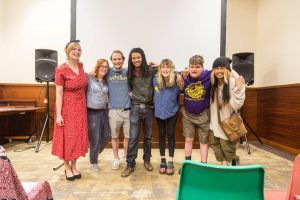 The Movie Mavericks host pop-up film screenings in a variety of locations, everywhere from empty courtrooms, alleyways, to old town halls. We screen about 7 public events a year, all enhanced with creative activities, music or something extra.

We have also worked internationally; two of our team went to Ukraine and ran a youth-led film night at an English teaching camp. This got one of our members Holly thinking, and last November I went over to Krakow with her to experiment with using short films to help develop teaching resources for children learning English. This year, Holly aims to develop the project and offer workshops with groups supporting refugees locally, to help children to learn English.

Partly inspired by Brexit, we wanted to bring international films to our home town. So last April we hosted Catalyst Film Festival, screening an international selection of short films based on creating social change. This year, we are exploring international ideas of Utopia.  (Initially due to take place on 15 April 2020 – currently postponed until a future date due to current health situation.)

How did you get involved with The Movie Mavericks?

I first got involved in the summer of 2017; I just wanted to hang out with some new people who have similar interests to me. Turns out I dropped onto a cracking bunch. Holly had been asked to get a group of peers together to then consult young people, aged between 18-25, about what they wanted from Stoke’s cultural scene, which could inform the City of Culture competition the city was preparing to enter.

We didn’t get the bid, but we learned that young adults wanted more music and film events and the chance to try creative stuff together. The group still wanted to do something and an opportunity came up to get some professional training on how to curate short films and build your own film night from Flatpack Film Festival. So after a few sessions, some pub and park meetings, we hosted our first event together! This was a “Feel Good Film Night,” screening a wide range of short films curated to explore what helps us emotionally on a day to day basis. It was really well attended and we brought in revenue for a new community hub, head’s were painted and dreams were shared. 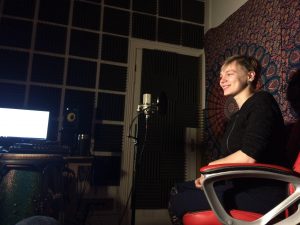 What is your role in the organisation now?

As a volunteer, I continue to be a part of this ace team. There is no formal committee, and as a group we oversee general organisation and programming, taking it in turns to programme different events according to who is available and interested at the time. I took on the organisation of an alternative love film screening night last Valentines Day which screened short films showcasing love outside of the mainstream representations we usually see.

In the run up to the festival last year, I got more involved with the community engagement side of things – including recruiting and managing a team of film festival volunteers. As a small core team, we all supported one another, learning as we went along. I found we all had our favourite roles and strengths. I enjoyed talking to people, Holly enjoyed film curation, and Danny was our amazing tech & web-page dude.

As we are based in a post-industrial city, we have to be affordable and accessible to local audiences, with an international reach. We have a welcome all policy.

This year we are pushing to engage more young people, particularly film students who would like to submit films to our festival. To give them a little support along their journey, we offer them a free submission portal. I guess it fits in line with our group’s characteristics; perhaps then we can recruit more Maverick’s and offer more young people opportunities to gain exposure and creative skills.

Our aims are to bring people together, to have fun and form a support network for young people within the core group and beyond. We have a lovely space to meet twice a week at the “Open Doors” – Meanwhile Foundation, which houses community groups in otherwise empty shop buildings to help the highstreet. Meeting’s take place here, film screenings, exhibitions, and general laughter. 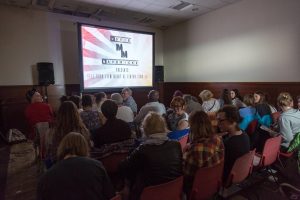 So our programming relies heavily on themes; we use these themes to collect short films together from every genre. Then we contact film makers and ask if we can screen their work. Putting the films together is often decided by considering the questions or messages we wish to stir up in the minds of the audience.

Our film festival is special because we set our theme and let filmmakers submit directly to us, often premiering new work to the public. “Films for social change,” was the theme of our first film festival. This was a broad category, with over 150 film submissions worldwide, so we did struggle with the selection process! We hosted small casual screenings in the run up to the event to watch some of the submissions. These “drink and judge” nights gave more people a say, and tested our audiences.

This year, our festival theme is much more focused. The topic is “Utopia.” Exploring what is your utopia? How is it experienced individually and collectively? In this sometimes grim political climate it seemed a good time to investigate  people’s idea of a perfect place. The selection will naturally and compare films made by people from every walk of life. 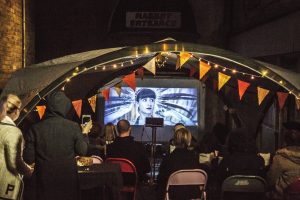 To feel part of a group… that are doing things on a regular basis and are making positive change in the areas that surround you… is amazing! I found it so good for me socially and emotionally. We should all feel belonging. I have found a network for life and I would encourage others to get involved with community cinema far and wide. To bring people together, to connect over goodness.

If you want to hear more from The Movie Mavericks, follow them on social media: