Cinema For All Board member Sukayna Najmudin spoke to young programmers Emma Baxter and Rachel Picton from The Futurist based in Elsecar, Barnsley about their experience of volunteering with a community cinema, and why they would recommend that you volunteer too…

Emma: We’re The Futurist based in Elsecar, Barnsley. We’re a community cinema run by volunteers that aims to make the experience immersive-based for the film we’re showing. We work together as a team on the different roles, from planning the experience to setting up screenings and making the night fun and unique for the audience.

Creating a theme to make the experience more than just watching the film is certainly what makes our cinema group unique, such as the screening of Labyrinth, where we created a Labyrinth maze for people to explore. For An American Werewolf In London in October, we decorated the event with spooky decorations and dressed in outfits of monsters to get everyone into the Halloween mood.

Rachel: We are currently running out of Milton Hall which holds approximately 160+ people and has facilities such as disabled access, a licenced bar and a kitchen so we can make tea and coffee for guests. Within our group we tend to share the roles; from programming and writing copy, to setting up the cinema and handing out drinks and popcorn.

What makes our cinema stand out is our dedication to making our screenings as fun as possible by making them interactive in some way, whether big or small and decorating the venue in a way that connects with the film. The history connected to the cinema also helps us stand out thanks to the original cinema (based in Elsecar) that we get our name from. 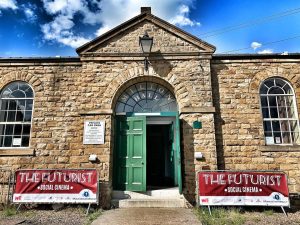 How are you involved with your cinema?

Emma: We work together on the different roles, but mine mostly include helping to create the idea for the immersive experience, setting the event up and assisting in running the Facebook page. I found out about the community cinema through Facebook after seeing their first showing (Back to the Future), and really wanted to take part, especially since it was so local for me. I’m passionate about films and love events with a unique touch, so I was really interested in joining in with the cinema.

Rachel: My main role is to run the Facebook page with the help of Emma. We plan and write posts while trying to keep the others in the group involved in the page too. I got involved when I went to a jobs fair and was looking through volunteer positions at one of the stands. As an avid film lover, I thought it would be a great opportunity. 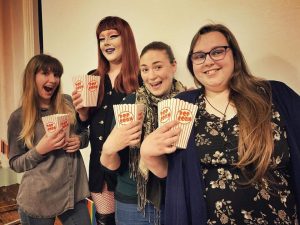 Emma: Our audience are often people aged 30+ or families, depending on the age rating of the film we’re showing. We try to engage them by keeping the Facebook page up to date and giving out leaflets in public spaces and through letterboxes. Both on Facebook and at the event, we do fun things that the audience would find amusing and would want to go and tell others about it. For example, for our recent showing of An American Werewolf in London, we put up a short video with some props to make it look like the werewolf had gone after The Futurist, which the audience loved and made a lot more people interested in seeing what antics would happen on the night.

As well as leaflet drops, our Facebook page is an important platform for us to involve the community in creating our screenings. For one screening, we let the community vote between what would be shown, The Princess Bride or Labyrinth. (Labyrinth won!) We also go to local events to increase awareness of The Futurist and let people have fun at our stand, such as helping people make badges linked to films we’re showing or letting them play a ‘guess the film’ quiz.

Rachel: We don’t really have a specific audience as we want to cater to everyone. We’ll have family screenings with kid friendly films and 15/18 rated screenings for older audiences. We want the local people to feel welcome no matter their age so we try to make events for them all, so no one is left out. We also try to make all our screenings interactive in some way to give people something more than just the film, if that means dressing up in silly costumes or creating a labyrinth out of sticky tape at the back of the venue, then so be it.

I’ve never really been all that involved with my local community before and as I’m not from Elsecar, I’m even less involved with that area but since joining the cinema it’s given me more opportunities to be involved. Now I’ve even attended a gala to promote the cinema and attended the Cinema For All Conference in September thanks to the cinema. 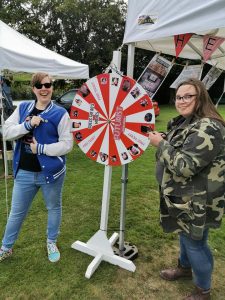 Emma: The films we pick are usually based on what we, or the audience, are interested in, and whether we can make the experience for it interesting. We have a little rule that at least two of us must have seen the movie. Currently, we’re doing an 80’s theme, since the original Futurist cinema was last open in 1985.

Our Christmas event was very successful last year, and we’re excited to be able to recreate the festive atmosphere and show Harry Potter this December. A lot of people have been asking about the Christmas showing, and it’s nice to see families relax during the busy Christmas time and enjoy the screening.

Rachel: At the moment we’re screening 80’s films. 80’s films always seem to bring in a nice crowd but we also get our name from an old cinema that was in Elsecar in the 80’s, known as “the bug hut” to those who frequented it when it was open. The original Futurist cinema is much loved by people in the area so we’re working off the nostalgia of that, bringing the community films that they may have been screened in the cinema when it was open. 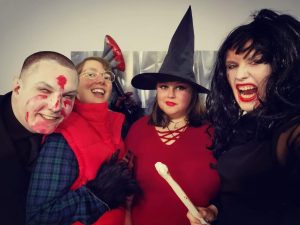 Emma: I’ve really been enjoying this experience as a young programmer, because it gives me an opportunity to find creative ways to make the screening experience exciting. It also gives me the chance to develop my communication skills when interacting with the audience, since I can be a little shy or nervous when talking to people.

Although we do have some young people in the 18-30 age come to screenings, we’re trying to find ways to engage this age group more. The other challenge can be deciding on a film, since it might be one that someone is passionate about, but it may not appeal to a wider audience.

Rachel: The main challenge with being a programmer, whether young or old, is trying to figure out what films your audience wants to see. Asking for audience feedback and suggestions can be helpful for getting an understanding of what they want to see but doesn’t mean it’s always a winning formula. I think it’s also important to remember that someone’s age doesn’t mean they don’t have a diverse taste in films, so assuming that young people will only watch modern films and older people will only watch old films never helps, and the same goes for assuming that only certain people will watch certain genres. You have to have variety or people will get bored. 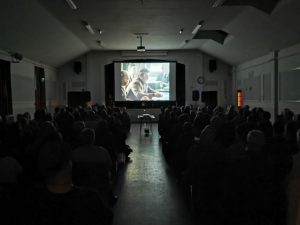 Emma: I love a lot of the cinema experiences we’ve put together, but my favourite would have to be the first event I took part in, which was the Elf screening in December 2018. I mostly served drinks and popcorn, but it was also nice to see both the audience and volunteers enjoy the screening and having fun. Seeing the impact it had on people made me certain I wanted to join the group and take part in creating unique cinema experiences.

Rachel: While all of our screenings are fun and entertaining, I think my favourite experience as part of a community cinema was at the Cinema For All Community Cinema Conference in Sheffield last summer. At the ‘Engaging Young Volunteers’ panel, I had the opportunity to weigh in on the subject of young people being viewed as lazy. It was a great experience because I was able to share first hand views of what it feels like to be viewed in a negative light while having people who have been part of these cinema listen and take in what what I was saying. 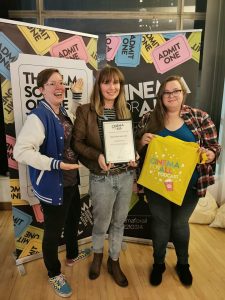 Finally, what advice do you have for anyone considering getting involved with community cinema?

Emma: I would definitely recommend other people to take part in community cinemas. There can be a lot of hard work put into deciding how the event will go, spreading the word and setting it up on the night. But for me, it’s really rewarding to see the audience enjoy the night and getting to talk with them about their thoughts or memories of the film. It’s a great chance to work on certain skills, like organising, technical or social ones like me. Plus, you get to enjoy great movies with a room full of people!

Rachel: I would recommend people join community cinemas because it’s fun. It can also be a way of including people from different walks of life or creating events for specific social groups. Our screening of Pride in June that we had to coincide with Pride month was important to me as someone in the LGBTQ+ community,to have that recognition and, as part of the cinema I could make it happen.

The main advice I would give to people who are interested in joining a cinema or already part of one is never be scared to share your opinion, we’re here to support each other to make these screenings happen and everyone who is part of the cinema should have a say in how things are run and what’s shown. Your opinion may just be the difference between a good screening and a fantastic screening, so try not to shy away from saying what is on your mind. 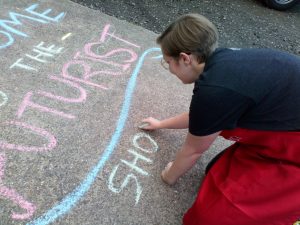 If you want to hear more from The Futurist, follow them on social media: