While working in film marketing and criticism, Corrina Antrobus noticed, with dismay, how little marketing budget was given to female-led films and how few female critics there were, leading her to create Bechdel Test Fest… 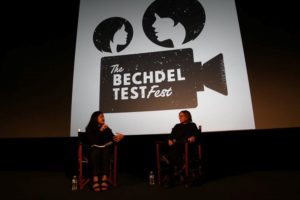 Bechdel Test Fest is an ongoing celebration of positive and dynamic roles of women in film. We put on events as and when we can in and around London at various cinemas who welcome us to guest program at their venues. We have a wide team of volunteers and are managed mainly by founder Corrina Antrobus, and film critics Beth Webb and Stephanie Watts. We all have busy full time jobs but run BTF events where we can and often guest curate for film festivals such as London Short Film Festival and Underwire.

As the Bechdel Test is fundamentally about two women talking, we like to play with the format of discussion to ensure everyone feels comfortable to contribute. We’ve hosted panels, round circle discussions, lightning talks and Q&As with people who can offer insightful reflections. 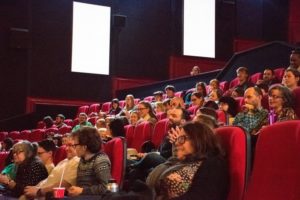 We select films we think demonstrate dynamic, positive and complex roles for women on screen. They can be docs, features, shorts or animation and are not limited to female -directed films. We believe in welcoming men to our events and programming as we need feminist men too. We look at retrospective films that may not have had the celebration they deserve when they were first released (past events include a Nora Ephron double bill, Drop Dead Gorgeous and a 30th-anniversary screening of Moonstruck).

Next year we are 5 years old and are looking forward to celebrating with some great events. We’re also celebrating the late great Penny Marshal, who was the first female director to release a movie which grossed over $100 million at the box office. We also have some exciting non-cinema launches too so watch this space… 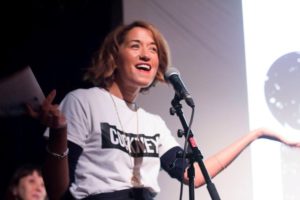 As our programming is so eclectic, we draw in lots of different audiences. We are big on social media and promote other female-led films and events that we think our audience should know about as we love supporting allies who help keep the thirst for female-led film quenched!

We work closely with the cinema we’re hosting at to ensure our events are marketed through their social media channels and newsletters and try our best to engage with the kind of conversations we want to have on the night before the event itself via social media. For example – our Can I Touch It? Event – shorts by black female directors exploring the relationship they have with their hair – we posted up provocations and quotes about black beauty ideals from influential black women to help whet the whistle. 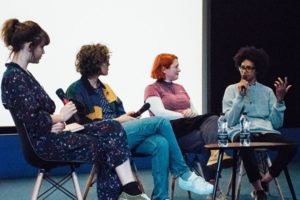 Time and money are always in short supply. But looking to Film Hubs and getting organised (and brutal) with your diary helps us get productive without putting ourselves too much out of pocket. We always negotiate fees before we put on the event also as trying to hustle a payment afterwards is too late.

I loved watching Deptford Cinema develop from a shabby old shop to a beautiful volunteer-run cinema with some of the most interesting programming in London. Seeing so many people come to enjoy their great events and check out their inspiring and diverse program gave us hope and encouragement that people do have a thirst for alternative cinema events! 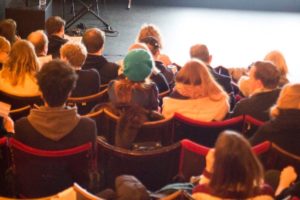 Finally, would you recommend that other people join a community cinema?

It’s a great way to find personal validation and fascinating film discoveries that aren’t usually available at your mainstream cinema. Find out who’s involved, sign up to their newsletters and social media and volunteer to help out. It’s good to be specific about what you can offer – are you great at social media? A great writer? Good at curation? Highlight the attributes you can and want to do and get in touch.