No Planet B is a pop-up film collective that inspires environmental activism through cinema. Their hope is that audiences will feel inspired by the films, talks and discussions that accompany them.

My name is Julia and I run No Planet B Film Club. We screen a variety of films with environmental themes, accompanied by informative talks and activities. We put on screenings both in traditional cinema venues and in community spaces, such as libraries. No Planet B is London-based but we have aspirations to tour the UK, in collaboration with other community cinemas!

There are environmental or “green” film festivals in existence already, but these largely show eco documentaries. No Planet B is unique in that it shows films from a variety of genres, all with environmental themes. The club also engages with the issues explored in these films through informative talks and activities. We have hosted speakers from organisations including Extinction Rebellion and Greenpeace. Every screening is accompanied with bespoke programme notes (examples of which can be found below), offering audiences ideas for getting involved in environmental activism. 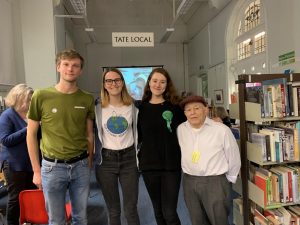 How did you get involved with No Planet B?

I started No Planet B on my own, and although we have some ad-hoc event volunteers, I’m responsible for researching, programming, planning, delivering and marketing our events. I started the film club to share my love of cinema and my environmentalism with others, having been inspired by climate activist groups such as Extinction Rebellion and Adapt. They have engaged a new generation of activists through creative civil disobedience, art and graphic design, and I wanted to be a part of that.

It can be challenging to run No Planet B alone, alongside my full-time job. It’s especially tough to market and promote screenings in a culturally rich city like London – there are so many events on any given day that it can be difficult to make yours stand out. Reaching new audiences can be a challenge too; we’re hoping that by reaching out to local community organisations, we can develop partnerships that will help bring environmental film screenings and events to a wider range of people. Finding funding can also be a challenge; we are very grateful for the support of Cinema for All to put on subsidised community screenings and am now looking for additional funding streams to cover speaker expenses and marketing costs.

With support from Cinema for All, we put on two screenings in my local library as a way to reach out to the local community. We partnered with an existing volunteer organisation that organises events for the library and they helped deliver and promote the screenings. We are keen to work more closely with our local community in the future, whether that means putting on more free or pay-what-you-can screenings, or by offering to put on educational screenings and events for local schools and youth centres. Our goal for No Planet B is to make a positive educational and environmental impact on our local community.

The audience varies slightly depending on which title we are screening, as some people come to see a familiar anime film and others to discover a new documentary. Our audience generally consists of people aged 25-65 who are interested in environmental issues and cinema. We engage with audiences by creating unique events, inviting special guest speakers and organising discussions after the film. We work with the venue as partners, to help promote our screenings. We use targeted social media marketing and submit to press listings online to broaden our reach. We have also worked with charitable partners for promotional support, such as the Environmental Funders Network.

No Planet B screens a mixture of older films and new releases, all with environmental themes. We don’t just screen eco-documentaries; No Planet B has also screened live action and animated films. When looking for new films, we research film festival programmes online for titles that are relevant for No Planet B. If possible, I go to screenings in person. Otherwise, I look for distribution or filmmaker contacts and contact them to request a screening link. Personal recommendations also help inform my programming.

We try to show films that would work well with a pre-screening talk. For example, No Planet B’s most recent screening was the Oscar-nominated documentary Honeyland, which was preceded by a talk by conservationist and beekeeper Daniel du Gard. Daniel spoke about the benefits of natural beekeeping, which aligned well with the sustainable beekeeping practised by Hatidze, the protagonist of the film.

No Planet B is hosting an environmental film season at an independent cinema called Catford Mews, in Southeast London. Our upcoming screenings have been postponed for now, due to the ongoing crisis and subsequent cinema closures; our next screening will be the film Weathering With You, followed by The Biggest Little Farm, which will be preceded by a talk from representatives from Sutton Community Farm. For now, we’re recommending environmental films that people can stream online at home via our social media channels. 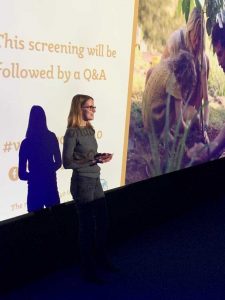 I have been involved in film programming in various ways since university; from curating a student film festival to participating in festival pre-selection panels and programming for Brainchild Festival’s cinema tent. There are many opportunities out there for young people to get involved with programming, but the vast majority of these are unpaid. It can be challenging to fit volunteer work around professional, academic and social commitments. Programmes such as Sheffield Doc/Fest Youth Jury and Barbican Young Programmers are specifically aimed at young people to give them experience and training, but they can be competitive and sometimes you don’t hear about them until after you have grown out of the age bracket!

There have been so many wonderful and thought-provoking events, it’s hard to do them justice by choosing only one! One event I found super interesting was a screening of documentary The Work at Deptford Cinema, followed by a discussion led by Richie Brave, a writer and speaker from Lewisham who explored the film’s intersections with masculinity in the UK. The discussion was very informative and profits from the screening were donated to Somerville Youth Provision. This event was organised by a collective called Love Theme From Flashdance that organises charity fundraiser screenings. Deptford Cinema is a brilliant community cinema in Southeast London that allows cinephile volunteers to programme all sorts of interesting screenings. 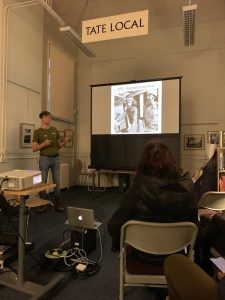 If you can see a niche or a lack of representation of a type of cinema you’re interested in, you should create your own community cinema or film collective! It’s so stimulating to organise your own events and you’ll meet other like-minded people who are motivated by the same things as you.

If you’re interested in volunteering with an existing community cinema, check out Cinema for All’s  My Community Cinema website and see what’s going on in your local area. Everyone I have met who runs a community cinema is so friendly and dedicated, it’s a great way to make friends and learn new skills.

If you’re interested in getting involved with No Planet B, no matter where you’re based, I’d love to hear from you.

No Planet B have kindly provided us their programme notes for The Age of Stupid, 2040, and Honeyland

If you want to hear more from No Planet B, follow them on social media: