Film Unit is one of the oldest Student Cinemas, founded in 1949 as a cinema but with a Film Society at the University of Sheffield dating back to 1919. Present day Film Unit consists of 24 committee members and over 100 front of house and and projection volunteers working screening over 50 films a semester to members of the Sheffield public. 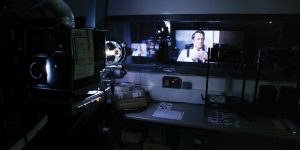 Callan Denham got involved as a house staff member during his first year at University, before becoming the Treasurer and then reached Chair status during his final year. Going to the Film Unit screenings at the start of his first year and being greeted by the then committee/house staff, made it clear that it was something he’d enjoy and want to be a part of.  He decided to join the committee because working in Film Unit made him realise how much he enjoyed film and being among the people who loved film too. Lydia Gordon joined Film Unit as an usher because she wanted to see the full schedule but needed to look after her bank account. She just fell even more in love with the whole experience of the student cinema – breaking tickets, meeting lovely people and making good friends and seeing movies on the big screen for free! This inspired her to run for Societies Officer, where she liaises between student groups and the committee to organise sponsorship packages. 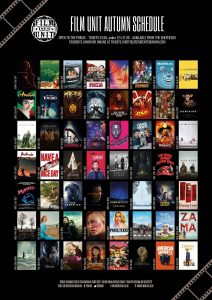 They schedule their programme based on votes by our committee on which films should be shown, based on suggestions from the committee, staff and audiences. They aim to include a wide variety of all films, mainly new but also old, of all genres and languages to highlight incredible film across the world. Not just from the UK/US. Film Unit has to work within a budget set by the Students’ Union and this doesn’t always include enough money for them to be as ambitious as they would like, challenging them to be creative to work within their means while delivering a bold programme. Their determination to provide an excellent cinema experience usually gives them enough interest and ticket sales to keep doing what they do best. In fact, they have some fantastic events coming up: a marathon to Lauch their new Feel Good Film Club with Monsters Inc., My Neighbour Totoro, Amelie, and Little Miss Sunshine; Metropolis Spiegeltent with a Live Score; and not to be missed, Rocky Horror Picture Show Immersive Screening on Saturday 27th October. 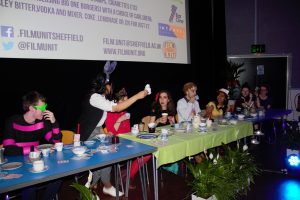 Film Unit’s audience is made up entirety of the Sheffield public, both students and non-students. They aim to attract anyone and everyone regardless of their inherent interest in film because they want to help their audiences experience something new. They date active across all social media sites on what we have occurring, distribute their programmes across the city, and are constantly trying new publicity ideas to attract a wide audience. As a group, they actively engage with their local community and even have a dedicated Outreach Officer, who works to involve Film Unit members in external volunteering and charity organisations. For almost two year, they have been operating a charitable free-ticket scheme so that local charities have access to their services for their clients.

What makes Film Unit, and ultimately all volunteer-run cinema so special is that it’s nothing but a group of dedicated film fans who know the value of cinema and the cinema experience. Working for free outside of their daily lives and educational priorities to provide people will quality film screenings. Film means a lot to them and we want it to mean a lot for others too. This is reflected in one of Lydia’s favourite Film Unit experiences, ushering at a screening of Silence Of The Lambs. So many people came together of all ages and backgrounds. Ushering was extra special for her because she got to meet people who were so passionate about the film, discussing the film before the adverts began. Amazingly, one of the audience members she met had ushered for Film Unit at least a decade ago. 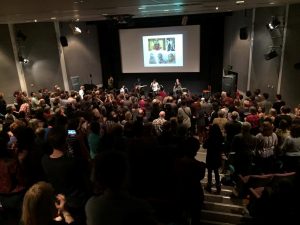 Callan recommends you join a community cinema if you have an interest in films because, ‘it’s the perfect environment to immerse yourself-in and realise that even the biggest self-proclaimed film fans can learn about and experience so much more than they thought.’ Lydia says, ‘it’s so much more personal than mainstream cinema chains. The feeling of helping provide an enjoyable cinema experience for all people just adds to the incredible feeling you get after you’ve watched a really good film. My advice for people interested in getting involved is just go for it; you won’t regret it; it doesn’t ruin the experience of cinema for you and it’s nice being able to see how a cinema runs whilst being able to help choose what films they show!’ What are you waiting for? Find your closest community cinema ASAP!

If you want to hear more from Film Unit, follow them on social media: