Rico Johnson-Sinclair is the Director and Lead Programmer of CineQ, a volunteer run, bi-monthly community cinema night that has been running for just over a year. Their focus is diversity and inclusion and their aim is to grow appetites and audiences for Queer films, LGBTQIA+ films and champion New Queer Cinema in the Midlands, with a particular focus on the perspectives of QTIPOC (Queer Trans and Intersex People of Colour).

Each film screening has an added value event from workshops to informal panel discussions, giving context to the films selected and ensuring that each event acts as a safe space for those discussions. Audiences to date are largely aged between 20-30 with a slightly male skew and on average they attract audiences in the range of 40-70 per event. 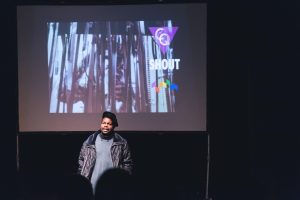 The regular film night runs from Centrala in Digbeth but since inception they have worked with venues and partners across the Midlands including; Mockingbird, Phoenix Leicester, SHOUT Festival, Birmingham LGBT Trust and Flatpack Film Festival to programme guest screenings and participate in panel discussions. He tried to avoid spaces that were overtly alcoholic, due to the fact that most LGBTQ+ spaces in Birmingham were in alcoholic spaces and therefore the socialisation was based around alcohol. Thankfully Centrala, who he had a great relationship with were ready to accommodate them. “They’ve been really supportive of CineQ from the beginning, and the space is perfect, as they already have most of the tech in-house.”

CineQ was first made because it was needed. During Rico’s time at Flatpack Festival as a Film Exhibition Distribution and Sales Trainee, facilitated by the ICO, he was lucky enough to have some frank and honest conversations with his line manager Amy Smart.

“You see the thing is about film, is that I always found it completely inaccessible. I come from a poor, single income background, so my only experience of the cinema until the age of 17 was going to see the Recess movie. The unfortunate thing about that is that I really do believe that exposure to film in your most formative years is really the best way to create interest for a new generation. And whilst cinema’s didn’t provide me with that, a mix of Film4, and, speaking frankly, piracy was my only experience of film, when at 13 years old, I used to visit the dvd man to get three new releases for a £5. Obviously this changed when service like Netflix and Amazon Prime Video began to appear. But without piracy, my interest in film wouldn’t exist. It’s not enough to scorn piracy without adding a suitable alternative.”

Amy really showed Rico that the best way to experience film is on the big screen with no distraction. But as an avid watcher and lover of LGBTQ+ film, there was nowhere he could go to experience that. A safe space for LGBTQ+ people to watch queer film at an affordable price on a big screen – it just didn’t exist, so he built it. 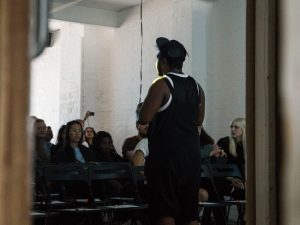 Social media makes it a lot easier for CineQ to engage with their audience, and LGBTQ+ social media channels are really communicative so he can cater for the community he was trying to serve. Rico found that there was a sizeable community of QTIPOC people that wasn’t being catered for by anyone (other than a group called UNMUTED) and felt duty to change this, living in a diverse city Birmingham. They’ve since screened films such as Check It, Closet Monster and a variety of themed short film programmes.

Whilst, they’ve faced several challenges, one of their biggest occuring programming. “It is really hard to obtain licenses for Queer rep film (films already released many moons ago) unless they are blockbusters. Very often it can take months for someone from distribution to come back to us, and even then the prices are always exorbitant. You have to know how to haggle, be honest and tell them your budget, speak about being community cinema. I alway thank my lucky stars when a film I want to screen is on Filmbank Media!” 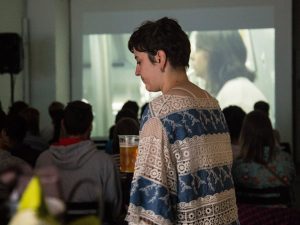 Rico’s favourite experience was screening archive film as part of LGBT History month. They held a panel about QTIPOC perspectives and finished it off with a performance, which had everyone out of their seats dancing. He had programmed the night thinking that archive film wouldn’t appeal to his audiences, especially archive film about black gay life in the 80’s, but when he received feedback it was actually one of the most impactful screening CineQ did.

“Thinking about a history of LGBTQ+ lives, it filled me with pride and happiness to see a community come together like that. Starting a community cinema is such a rewarding experience. Connecting younger and older people alike with the film that might change their viewpoint is something special. Film is one of the most influential forms of media and if you come at it with a sense of love and devotion, it’s not that hard to accomplish and sustain.” 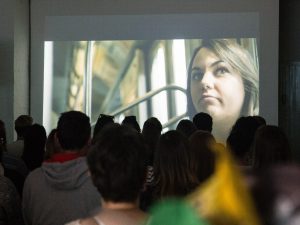 CineQ’s next, and final bi-monthly event is a Halloween screening of the cult classic, Party Monster, featuring a post screening dance party. Rico is actually Wiccan, so Halloween/Samhain is actually his version of new years and he couldn’t think of anywhere better to spend it than with his second family.

After that, CineQ is becoming a two day queer film festival taking place in March so stay tuned for that!

If you want to hear more from CineQ, follow them on social media: