In September 2018, Cinema For All supported 13 people aged between 18-30, from Leicestershire based charity FOCUS, to launch their own community cinema, Dream Screen.

FOCUS’ activity typically involves working with some of the city’s most vulnerable young people to involve them in the decision making of some of the city’s largest cultural events and festivals. Curating cinema experiences had been of interest to the young people that attend FOCUS’ sessions for a while, with them keen to take on the role of programming their own film screenings in their community.

Supported through our HotHouse programme, Dream Screen received face to face coaching sessions from the Cinema For All team and a bursary to fund their first season of films. Over the course of these eight screenings, they reached an audience of over 130 people and engaged with disadvantaged communities across the city. They screened in venues that were kindly donated them by New College and De Montfort University.

Cinema For All’s HotHouse programme provided them with the experience to develop new skills such as public speaking, equipment management, money management, graphic design and project management. The young people described the community cinema they built as “a place of escape and comfort” and credit the success of their screenings to the communities that attended their events – “with the help of the community we made magic, and it couldn’t have been done without the people of Leicester”.

The group’s final screening as part of the programme (Home Alone) saw them double their audience to 66 attendees, indicating the growth of their cinema as they became more confident and skilled in marketing. This outcome, along with 100% of attendees stating they would attend a similar screening in the future, proves that there is clear need for community cinemas in Leicester.

Dream Screen are now planning their next two screenings, which will be held at local children’s hospice, Rainbows, and a local retirement home for the elderly. Over the course of the project we have seen the young people become more confident in their programming choices and more engaged with the outreach possibilities of running a community cinema. They really want to make their next two screenings accessible for those who are unable to attend local cinema due to their complex needs. 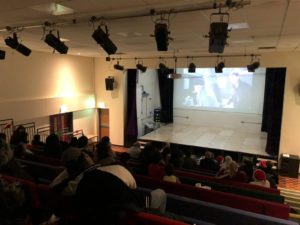 This project was made possible by the generous donation of Octagon Films in Market Harborough who were the first group in the UK to invest in our pioneering member-supported fund, Pay It Forward: All Our Communities, and the BBFC.